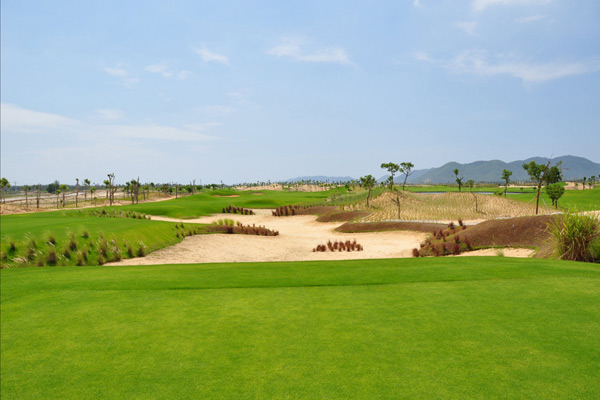 During the summer months we managed the finishing touches of construction at two beautiful Schmidt-Curley Design courses in southern China.

Nanlihu Golf Club, an hour’s drive south of Haikou, the capital of Hainan province, is a dramatic remodel featuring palm tree-lined holes, undulating fairways, and devilish greens. Set alongside Nanli Lake, 11 holes bring the water into play, making this par-72, 7,000+ yard layout a tough yet fair test from all tees. Flagstick’s team is thrilled by the positive reviews the course has already garnered. We thank all of the many parties who worked so collaboratively to make this remodel a success from start to finish.

Along the southern coast of Guangdong province, just a short skip across the South China Sea from Hainan, lies the sparkling new Poly Silver Beach Golf Club. With unobstructed ocean views on one side and mountains on the other, this sun-drenched course is a visual feast. And the golf is top-notch too! Playing across sand dunes and numerous water features, the design complements the natural surroundings and tests players with a wide variety of shot-making challenges.

Next time you are in Hainan or Guangdong, don’t miss out on the chance to play these two newly-opened gems.